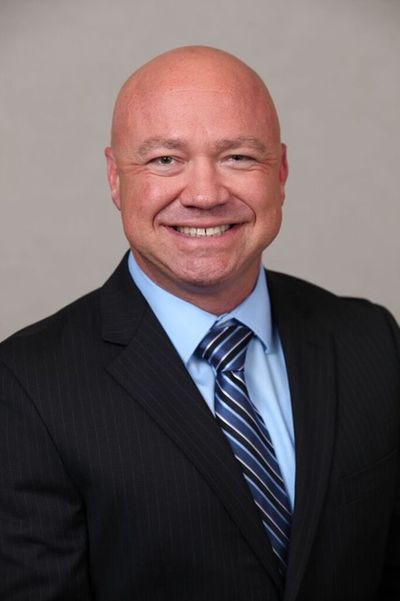 Jeff Carson graduated from The University of Texas College of Pharmacy in 1996. He is a third generation pharmacist and is married to a pharmacist, bringing the family total to 9 pharmacists dating back to the eighteen hundreds. He is the President and owner of Oakdell Pharmacy, LLC., which includes 2 retail pharmacies, a home infusion pharmacy, and a closed door nursing home pharmacy.

It didn’t take long for him to realize how deep his passion was for his chosen career. By the end of 1997, he was actively pursuing prescription compounding. Not only was it professionally satisfying, he saw the difference it was making in his patients. This drove him to pursue it even further. In January of 2005, he was recognized by Professional Compounding Centers of America as the Pharmacist of the Month. And in 2010, he was honored as PCCA Compounding Pharmacist of The Year. During his pursuit of compounding, he became very politically active in local, state, and national pharmacy politics and devotes a significant amount of time protecting and ensuring the growth and viability of his cherished profession of pharmacy to this day. In 2010 he followed his father's footsteps by being named fifth Vice-President of The National Community Pharmacist's Association and currently sits on their board of directors. When the time comes, he will become only the second, second generation president of this prestigious trade organization.

Mr. Carson believes in educating physicians, patients, and consumers about the treatment choices not commonly offered when conventional medicine has failed. He is an accomplished public speaker on a variety of topics and is frequently invited to speak to a variety of groups around the country including colleges, state and national associations, public organizations, private businesses, as well as the local news and talk shows. In June of 2017, he was invited to be a keynote speaker for PCCA Australia’s International Compounding Symposium.

Mr. Carson spent years teaching at the University of Texas College of Pharmacy and the Incarnate Word Feik School of Pharmacy as an adjunct professor. He also enjoys speaking to future pharmacists in several pre-pharmacy organizations as well as several different high school groups. While he respects the past and the present, he is constantly challenging everyone around him to think “out-of-the-box” as they proceed into the future! His passion for success thru change earned him the honor of receiving the Innovative Pharmacy Practice Award along with his father, from the Texas Pharmacy Association in 2001, and the Distinguished Young Pharmacists award, also from the Texas Pharmacy Association, in 2005. His leadership was proven when The Academy of Independent Pharmacists was awarded the Academy of the Year, from the Texas Pharmacy Association, in 2005. With the generous help from his board, they changed the Academy of Independent Pharmacists into one of the most successful academies within TPA.

While being extremely active in his profession, he still finds time to spend with his two sons, Tyler and Ryan, lovely wife, Amy, and canine companions Hadley and Sienna. He loves cooking, playing tennis, fishing, hunting, UT Football, the San Antonio SPURS, and is an amateur marine biologist/aquarist. And on a few days each year, you can find him playing city slicker on the family ranch outside Gonzalez, TX where his family has been running cattle for more than 4 generations. 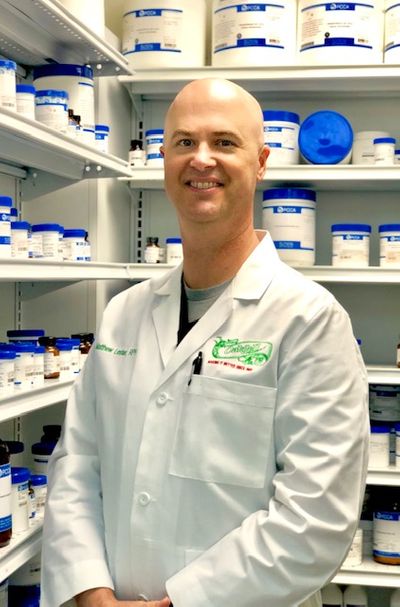 Matthew Lester graduated from The University of Texas College of Pharmacy in 1996. He is the Chief Operating Officer of Oakdell Pharmacy ,LLC, where he has worked since 2000. During his tenure with Oakdell, he has worked in infusion, long-term care, consulting, and disease state management areas of pharmacy. He has a passion for helping patients wherever their journey of life is taking them.

Matthew currently serves as a luminary for CPESN (Community Pharmacy Enhanced Services Network) Texas in an effort to fix a broken healthcare model. He was also selected to serve on the National Community Pharmacist’s Association, Compounding Steering Committee. Matthew has been a preceptor for both the University of Texas College of Pharmacy as well as Incarnate Word Feik School of Pharmacy, as an adjunct professor, helping to train the pharmacists of tomorrow. He maintains advanced certifications in sterile compounding and hormone replacement.

When he is not at work or busy within his profession, he still finds time to spend with his children, Maysen, James, and Ryan, as well as his wife Rebecca. They have an active home life with their pets, including chickens and goats. He is active in his local church teaching both children and adults. He shares his love of the outdoors with his children who all love hunting and fishing. He also serves as an Assistant Scoutmaster with Boy Scouts of America. 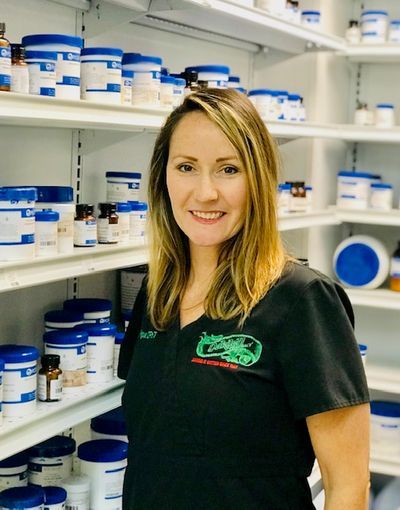 Cindy Pegues serves as Vice President of Compounding Operations. She is a Registered Technician and maintains her license with the National Pharmacy Technician Board. Cindy is also a member of Oakdell’s Senior Management team.

Over the past 19 years, Cindy has served in various capacities within the pharmacy. Upon receiving her certification from San Antonio College of Medical and Dental school in 2001, she served as Lead Technician for Oakdell’s retail division. Her passion for compounding led her to pursue her certification in sterile compounding in 2013.

At present, Cindy is responsible for the Quality Assurance Program at Oakdell. She works extensively with pharmacists, compounding technicians and management to ensure a quality compound is produced, following USP <795>, <797> and Texas State Board regulations. 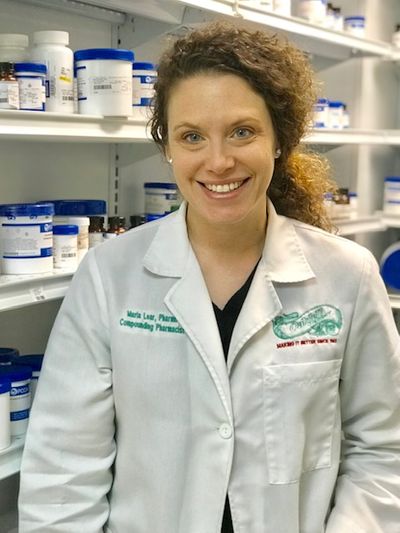 Dr. Marla Lear is a graduate of the University of the Incarnate Word Feik School of Pharmacy where she received a Doctorate of Pharmacy with honors in 2011. She also holds a Bachelor of Science degree in Biology, with a minor in Chemistry from Texas Lutheran University. Before attending pharmacy school, Marla worked in pharmaceutical and biomedical research in the areas of oncology, burn and inhalation injury, where she is published in a number of journal publications. During her pharmacy internship year, Marla received training in compounding, oncology, and internal medicine.

Marla has been a part of the Oakdell Pharmacy compound team since 2011, and currently holds the position of Long Term Care Pharmacist in Charge, and works extensively with our Clinical Team. In addition, she has attended educational seminars in areas specializing in Hormone Replacement Therapy, Sterile Compounding, and Immunizations. Marla specializes in preparing new formulations to meet the needs of each individual patient, and is available for consultation for our compound patients and practitioners through our Clinical Team. She is also the 2018 recipient of the Oakdell "O" Award for Excellence.

Marla is an active member of the Bexar County Pharmacy Association. She also enjoys being a preceptor for pharmacy students during their community pharmacy rotations.

Marla resides in Alamo Heights with her husband and two sons. She and her family enjoy swimming, going to the coast, baking, entertaining friends and family, traveling, and being active members at their church in La Vernia. 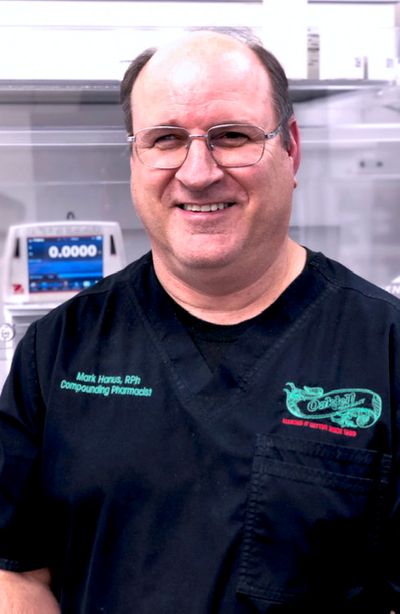 Mark Hanus started his career as a pharmacist in 1982 after graduating from the University of Texas at Austin. With over thirty-seven years of experience as a pharmacist, he has seen the industry from multiple vantage points. Practicing pharmacy in retail, compounding, pain management, long-term care and hospice, has inspired a passion for treating patients with chronic pain.

Currently working as a compounding pharmacist specializing in topical pain creams, Mark consults with doctors to establish treatment plans for patients with chronic pain. A treatment plan includes collaborating with practitioners to develop patient specific formulations with individualized dosing and application sites. Mark educates patients on the use of creams, application, side effects, and expected results.

Mark currently resides in San Antonio with his wife of 37 years. They have three children, two of which are pharmacists, and one a sterile compounding pharmacy technician. He enjoys spending time with his family and volunteering in the community. 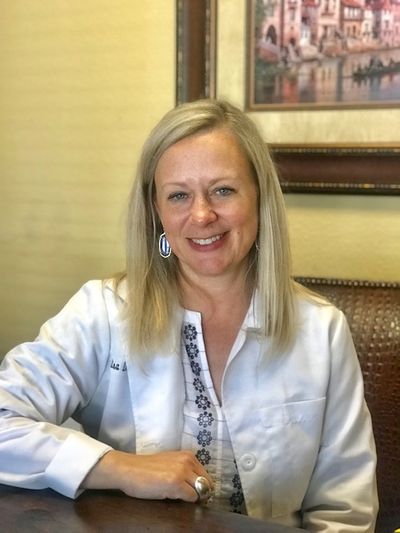 Alisa received her degree in Biology from the University of Texas at Austin in 1996. In 2000, she earned her Doctor of Pharmacy from Texas Tech University Health Sciences Center. She has proudly served Oakdell for over ten years.

Since 2012, Alisa has lead Oakdell’s Wellness Department. In her role, she educates both patients and physicians on the various treatment options for bio-identical hormone replacement therapy. In 2016, she received her certification through Professional Compounding Centers of America as a Bio-Identical Hormone Replacement Specialist. Additionally, Alisa is a certified immunizer offering travel and routine vaccinations to patients.

Alisa and her husband Steve have three children, and in her spare time she enjoys traveling, visiting with friends and cheering on her children at various sporting events. 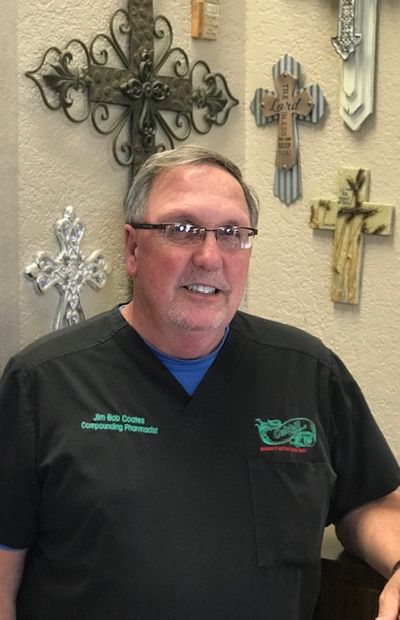 Jim Bob is a graduate of Southwestern Oklahoma State University, where he received his Bachelor of Science degree in Pharmacy. He completed his pre-pharmacy hours from Texas A&M University. Jim Bob has been a part of the Oakdell pharmacist staff since 2011.

With over thirty-seven years experience in pharmacy, Jim Bob enjoys interacting and counseling patients, and is an integral part of the Oakdell Pharmacy team. He currently serves as the Pharmacist In Charge of Oakdell Pharmacy at Stone Oak. He maintains certifications in both sterile compounding and immunization. He also serves as a preceptor for future pharmacists. Jim Bob was recognized by his peers as the “O” Award recipient in 2013.

When not in the pharmacy, Jim Bob enjoys spending time with his family. 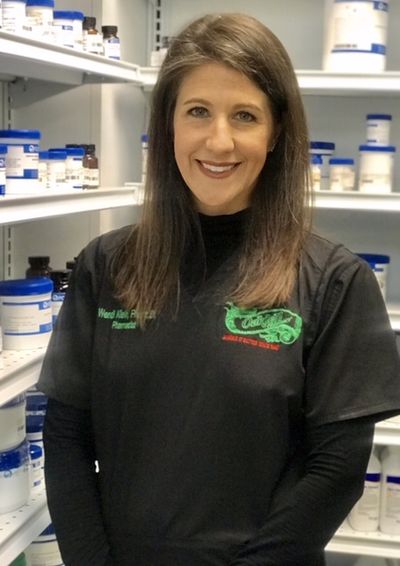 Wendi is a graduate of the University of Texas at Austin pharmacy school, where she graduated with honors. She has over twenty years experience as a pharmacist, serving as a valued member of the Oakdell Pharmacist staff for the past twelve years.

Wendi has received extensive training in bio-identical hormone replacement therapy and compounding. She is a member of the Texas Pharmacy Association and maintains her certification in Sterile compounding.

Wendi is married with three children and two dogs. She enjoys spending time outdoors and actively participating in her children’s extra-curricular activities. 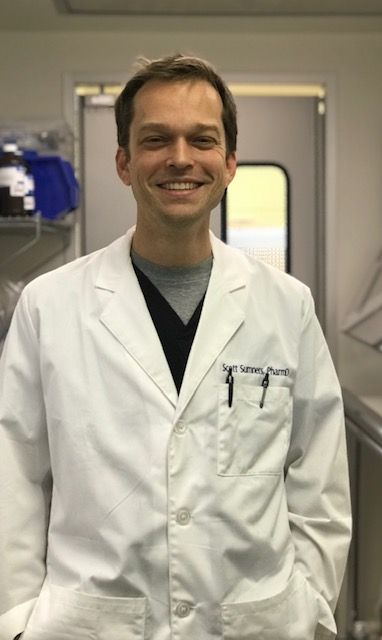 Scott earned his Doctor of Pharmacy degree from The University of Houston College of Pharmacy in 2007. He has been with Home Intensive Care Pharmacy and Oakdell Pharmacy for over ten years, and currently serves as the Director of Infusion Services.

It is Scott’s belief that every person was created as a unique individual and ridged, cookie cutter therapy options are not always best for his patients. He believes that as a pharmacist, he can do more than the status quo by individualizing dosing options through patient specific compounding and patient care. 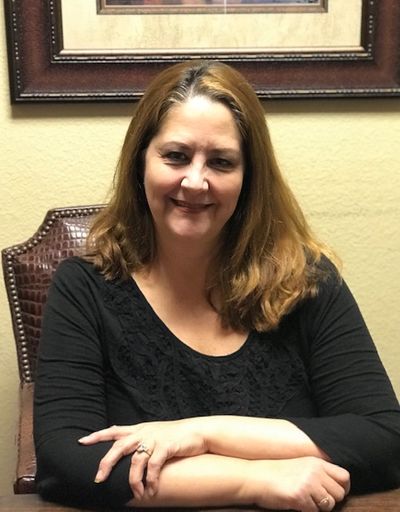 Kimberly has over 37 years of experience in the accounting industry, and has served as Oakdell’s accountant for the past eighteen. She has been in her current role as Contoller/HR Director since 2017. Additionally, Kimberly serves as a member of Oakdell’s Senior Management Team.

Kimberly’s love for accounting and auditing began at a young age. She held various positions in the field of accounting, and obtained her certification from H&R Block in 1982. Her admiration for the founder and owners of this family owned small business is what drives her. As HR Director, she is responsible for all employee relations and pursues continuing educational courses to ensure she is abreast of the most current laws.

Kimberly enjoys traveling and cruising. She has been happily married to her husband Joey for 35 years, has two grown children, Brandi and Joel, and a wonderful daughter-in-law, Amber.